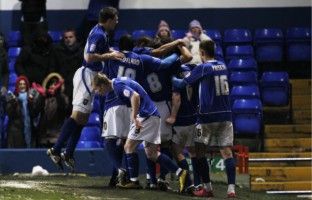 Town in 1-0 win over Premier League side West Brom

Town will now face Arsenal after being draw against the north London side, with the first leg to be played at Portman Road in the New Year. The games will be played on January 11 or 12 and January 25 or 26.

Manager Roy Keane expressed his delight at the successful outcome for the players. “I’m delighted for them and the staff but especially for the supporters. We’ve let them down over the last month but tonight we have given them something to smile about.

“It will be a great education for the players, especially the youngsters but a month is a long way off yet,” he told the club website of the upcoming challenge.