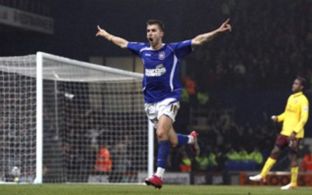 ITFC in stunning 1-0 win over Arsenal at Portman Road

A Tomas Priskin goal secured a 1 – 0 win over premiership side Arsenal in the first leg of the Carling Cup final last night (12 January).

The 77 minute goal by the Hungary international will keep the Wembley dream intact for the visit to the Emirates at the end of January.

This was Ipswich Town’s first time to make a last four cup appearance in 10 years.

“The players worked really hard and now we have to build on this result and start climbing the league.”

One of the biggest games in the recent history of Ipswich Town and against a team that is regarded as one of the best in Europe, a capacity crowd of just under 30,000 was in attendance.