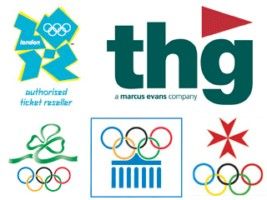 thg sports tours, www.thgsportstours.com, a division of the marcus evans group, has been confirmed as Authorised Ticket Resellers (ATRs) for three European Olympic Councils (Ireland, Greece and Malta) ahead of the London 2012 Olympic Games.

On 15 March thg sports tours released a range of ticket and tour options to complement the VIP Corporate Hospitality events  being provided through thg, the sports hospitality division of marcus evans.

With the countdown to the London 2012 Olympic Games well underway, a high level of interest in following and attending the global spectacle is expected in Ireland, Malta and Greece.

The London Olympics will take place from 27 July to 12 August, 2012. London will become the first city to officially host the event three times - the last time was in 1948. With 26 sports and 38 disciplines over a two-week period, the event is a once in a lifetime opportunity to strengthen business relationships with premier clients.

marcus evans is a global, pioneering brand and are specialists in the provision of corporate hospitality, high level business events and business training. Its sporting interests also include ownership of Ipswich Town FC.