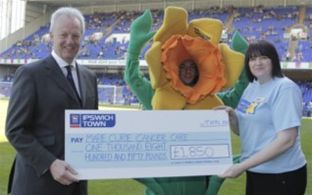 The money was donated by ITFC supporters to the Football League’s Official Charity of the Year.

ITFC supporters raised the bulk of the money after volunteering at the home game in March against Reading.

Marie Curie Football Week is key in generating the funds the charity needs to deliver more free nursing care in every Football League community throughout England and Wales.

Throughout the season, the Football League has united to support Marie Curie in a campaign designed to raise awareness and funds for the charity.

“I’m delighted that we’ve been able to donate such a sum to Marie Curie Cancer Care and it’s a tremendous testament to the generosity of our supporters.

“Raising awareness for the charity has been one of the aims of the Football League this season so it was especially pleasing to involve the local Marie Curie branch representatives and nurses,” Simon Clegg explained.

Marie Curie Cancer Care was chosen by fans to be the Official Charity Partner of The Football League for the 2010/11 season. Marie Curie Nurses provide care, free of charge, to terminally ill people in their own homes and its hospices.

Marie Curie employs more than 2,700 nurses, doctors and other healthcare professionals and expects to provide care to around 29,000 terminally ill patients in the community and in its hospices this year.