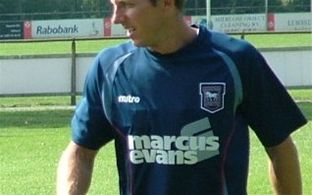 Bowyer is new signing for ITFC

England international Lee Bowyer, who arrives as a free agent, has put pen to paper on a one year contract with Ipswich Town.

Bowyer has clocked up close on 600 appearances in first-team football, spending most of his career in the Premier League.

He started his career at Charlton, before going on to play for Leeds, Newcastle, West Ham and Birmingham, helping the midlanders to Carling Cup success over Arsenal at Wembley last season.

Ipswich Town beat off the challenge of Premier League clubs to sign the midfielder, Bowyer said: "There was interest from other clubs but Ipswich is the right choice for me.

"I know all about the traditions of the club and the history after working with Sir Bobby Robson at Newcastle. I know it's a family club but having met the manager [Paul Jewell], I know it's also an ambitious one and that's very important for me.

"Everything I heard from the manager was very positive. He wants to get Ipswich back in the Premier League and I'm looking forward to playing my part in trying to make that happen."

"Anyone who has seen Lee play over the years knows he is a winner and he will bring that winning mentality into our dressing-room."