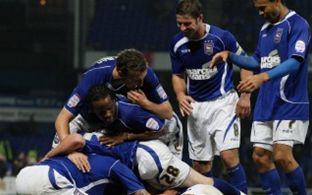 Keane delighted for fans and players

Ipswich Town progressed to the quarter finals of the Carling Cup for the first time in nine years following their victory over Northampton on Tuesday, 26 October.

Goals from Carlos Edwards, Damien Delaney and Tamas Priskin saw Ipswich Town secure their place against the Cobblers in a convincing 3-1 win.

Town took on the Cobblers at Portman Road after a run of eight successive away games in club football with Roy Keane in charge for his first ever cup tie on home soil as manager.

Keane expressed his delight at for both the fans and the team after watching his side progress to the quarter finals.

“I thought we started well but we were disappointed with their goal. The fans stayed patient although it was important to get back into the game quickly and it was a great finish from Carlos. While the Championship is obviously our priority, we want to go as far as we can in the Carling Cup,” Keane explained to the ITFC website.