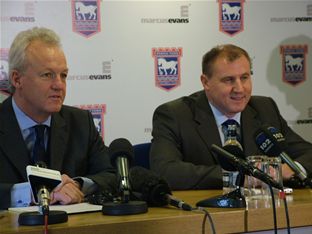 Paul Jewell (right) has been appointed as the new manager at Ipswich Town, after signing a two and a half year contract.

The former Liverpool apprentice spent 15 years in the game as a player at Wigan, Bradford and a brief spell on loan at Grimsby before being handed his first manager’s role at Bradford in 1998.

He guided the Bantams into the Premier League two years later, the first time the club had played at the top level of English football for almost 80 years.

Paul steered Bradford to Premier League safety on the final day of the 2000/01 season with a win over Liverpool, his last game in charge before he took over at Sheffield Wednesday.

He spent eight months at Hillsborough before parting company with the club and returning to another of his former sides, Wigan, to take over the managerial reins.

In his time with the Latics, he established them as one of the most attractive sides outside the Premier League. In his second season at the then JJB Stadium, 2002/03, they won the Second Division title and within two years Wigan were in the top flight for the first time in their history – pipping Town to automatic promotion.

More success followed the next year with Paul taking Wigan to the Carling Cup Final in 2006, where they were beaten by Manchester United.

With Wigan maintaining their Premier League place for a second successive year in 2007, he stepped down as boss to take a break from the game.

He was touted as a possible manager of England at the time but after a three month break he was unveiled as the new manager of Premier League newboys Derby, taking over with the club anchored at the bottom of the division.

Jewell couldn’t keep Derby in the Premier League and in December 2008, ironically after a home defeat by Town, he stepped down as Rams’ boss.

“I wanted to appoint a manager with several years of experience behind them who also had a history of promotion and then staying up,” said Town owner Marcus Evans.

“I have been lucky enough to find a manager in Paul who has done that twice and pertinently with two clubs who had never been in the Premier League. It was also important to bring someone to the Club who could play the way Ipswich expect the game to be played and who will embrace the Club’s role in the community.”

Jewell said: “I am delighted to be given this opportunity at such a fantastic club as Ipswich Town.

“I have had other opportunities but not as exciting as coming here and I’m looking forward to starting work with the players.”

Town chief executive Simon Clegg added: “The owner and I spoke to a number of excellent candidates to take on the role as the next manager of Ipswich Town but Paul’s experience and credentials made him our number one target.

“We are delighted to have him at the Football Club. I’m looking forward to working with him and I’m confident Paul can put in the building blocks that will allow us to achieve our long term goals for this great club.”