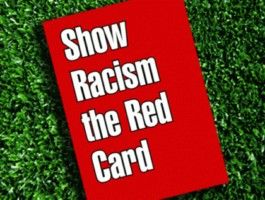 Ipswich Town FC is reinforcing the message that there is no place in football for racism.

Portman Road hosted an event on 31 March aimed at young children and supported by former England, AC Milan and Watford striker Luther Blissett. The ‘Show Racism the Red Card’ initiative is designed to raise awareness about the issue in football.

Former ITFC midfielder Simon Milton joined Blissett at the event as both players shared their experience of racism in football.

“It’s important to teach people from a young age that racism, not just in football, but on any level is wrong. It’s very positive that campaigns like this have the backing of former high profile players like Luther, Didier Drogba, Thierry Henry and Ryan Giggs, who all featured in the video the children watched,” according to Milton.

‘Show Racism the Red Card’ CEO Ged Grebby said: “We are confident that the anti racism message shown on the day has further illustrated the club’s commitment to tackling racism through education and has helped to show young people from the area that there is no room in Ipswich for racism; in football or in society.”

ITFC and their Charitable Trust are firm supporters of anti-racism campaigns and take a zero tolerance stance on racism, according to the club.