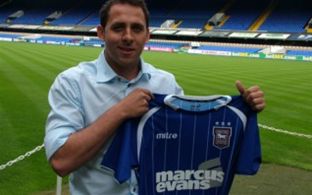 Michael Chopra has joined Ipswich Town from Cardiff for an undisclosed fee. The 27-year-old striker has signed a three-year contract at Portman Road.

Chopra started his career as an apprentice at hometown club Newcastle and worked under former Town boss Sir Bobby Robson at St James’ Park, going on to make 32 appearances for the club.
He had loan spells at Watford and Nottingham Forest before a further loan at Barnsley in the 2004/05 season saw him bag 17 goals in 41 games.
In 2006, Cardiff paid Newcastle £500,000 for his services and he proved a massive hit with the Bluebirds, scoring 22 goals in 44 games.
It was form that persuaded Sunderland to part with £5m for him the following summer and he gave the Black Cats an opening day victory in the Premier League with a late winner against Tottenham.
He spent two years at the Stadium of Light but after a loan at Cardiff he returned to Wales in a permanent deal in July 2009 in a club record £3m deal.
The goals continued to flow with the front player taking his tally to 65 in 162 appearances in total for the club by end of the 2010/11 campaign.
“I enjoyed my time at Cardiff but this is a new start for me at Ipswich and I’m looking forward to it,” Chopra said.
“I spoke to the manager and was impressed with his plans for the Club. I know some of the players here as well and from talking to them, it was clear there is real ambition at Ipswich.
“I can’t wait to get going and the target is to help the Club reach the Premier League.”Town boss Paul Jewell added: “Michael is a top quality striker with a proven track record when it comes to scoring goals.
“He is just the type of player we are looking for to help take this Club forward.”
Town chief executive Simon Clegg said: “We’re obviously delighted to have added Michael to the squad. It’s a signing that I’m sure will excite our supporters.”