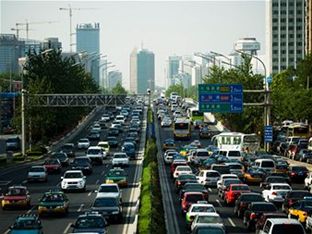 SkyTran will contribute to the sustainable and efficient operation of global cities, says inventor

It was an inventor’s epiphany that led to the birth of SkyTran, a novel and futuristic concept for city travelling.

As global cities are choking from the endless gridlock and pollution as well as escalating road accidents causing death, Doug Malewicki believes he has come up with a workable alternative to eradicate the scourges associated with modern-day city transport.

SkyTran is a transport system that can carry more passengers per hour than a six-lane freeway and use 95 per cent less energy than an automobile while doing it.

Malewicki, inventor and founder of SkyTran, is a speaker at the marcus evans Asian Infrastructure and Property Development Summit will take place on 4-6 July in Macao.

“A long time ago, when I was thinking about the growing problems the planet is facing - like horrible traffic congestion, horrible pollution, way too many deaths from automobiles (40,000 deaths a year and 200,000 permanent maimings in the USA alone) and wars over oil I guess you could say I had my inventor’s epiphany,” Malewicki explains.

After extensive research he found that it would be affordable to cover an entire city with a 3-D grid of SkyTran elevated guideways for approximately the same cost that it would take to build a single linear light rail line through a city.

“Transitioning half of the US's annual three trillion car miles to SkyTran will eliminate 50 per cent of oil imports while only increasing electricity consumption by six per cent.”

Malewicki adds that the SkyTran concept could world beautifully in an Asian context.

Malewicki puts forward a thorough argument that SkyTran will contribute to the sustainable and efficient transport operation of global cities.

“Because the SkyTran cruises non-stop with very low energy requirements we can actually afford to install all the photovoltaic electrical generation panels to power all our vehicles on any SkyTran 3-D grid.
At the other end of the scale, the cost to provide enough solar electric power to accelerate a 1,000,000 pound commuter train would be ridiculously prohibitive.

“We have been working with some of the top solar system developers and installers in the USA. Their studies tell us that today’s breakeven point for SkyTram is a mere four to seven years! Those renewable solar costs includes the storage and excess generation capacity needed, so that the SkyTram system will not have to depend on grid power during rush hour and can also run throughout the night. There are new technologies coming to fruition in the solar photovoltaic arena that in 10 or 20 years will reduce payback time to a year or less for all applications. Our grandchildren will live on a clean unpolluted planet.”

The marcus evans Asian Infrastructure and Property Development Summit will take place on 4-6 July in Macao.