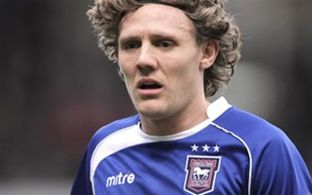 Ipswich Town have pulled off a major coup in signing Jimmy Bullard this week. The midfielder has completed a deal to join the club on a two-year contract.

Voted Ipswich Town’s ‘Player of the Year’ last season after a three-month loan spell, Bullard’s signing is a welcome development for fans.

Manager Paul Jewell expressed his delight at the addition to his squad.

“We have been chipping away at Jimmy and Hull all summer to try and sort something out but Hull were adamant he wouldn’t be going out on loan again unless someone paid his wages.

He had a few clubs to talk to but Jimmy made it clear that if we could sort out a deal then coming here would be his preference.

“Hopefully he can do what he did for us last year and beyond.”

When Bullard came to the club last season Jewell had this to say: “He has played in the Premier League and has a lot of experience. He is a good technician, a good passer of the ball. He’s also a great character and will improve our squad.”

Ipswich will face Leeds this Saturday (27 August) at Portman Road.

ITFC is a marcus evans company